In and Back Out Again

Our final team member, Ross, arrived Saturday night. So, we are now a complete group of 4 from Dartmouth! Together, we've spent the past couple of days in McMurdo in our lab processing our samples. 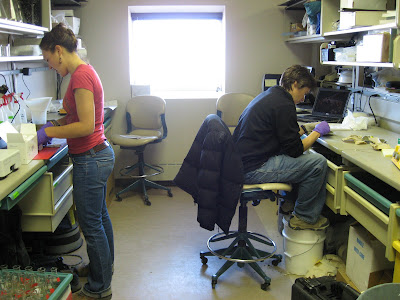 Elizabeth is busy picking all of the rocks out of her soil samples. The soils she is studying are very rocky, and the pebbles have to be removed before she can measure their chemistry. Doesn't that look like fun?!

We will be heading out to the field again tomorrow. We will be splitting up into two groups so that we can get more work done. Katie and Elizabeth will be going back to Lake Fryxell where we went the first week of our field work. Ross and I will be moving around all over the valley for the rest of the week. We'll be busy!

~~~~~~~~~~~~On another note~~~~~~~~~~~~~
Check out the awesome card I got in the mail yesterday, drawn by my friend Bob! Cedar waxwings like these live in the trees outside my office back at Dartmouth, so I put the card over my desk here in McMurdo to remind me of home. 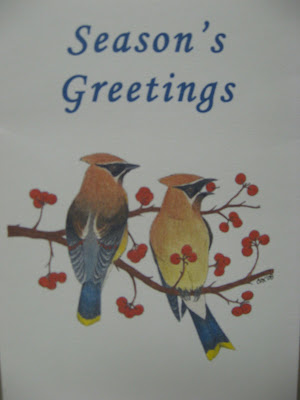