We are at sea!

Yesterday, we stowed all of our gear on board our ship, the Laurence M. Gould (or LMG for short). This will be our home for the next month!

Here is the LMG in port at Punta Arenas. You can see the crane towards the back working hard, unloading the gear from the previous research project and loading gear for ours: 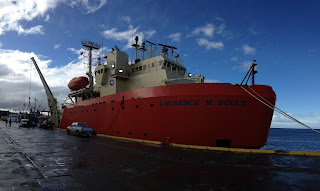 The LMG is named after Laurence McKinley Gould, an early polar scientist and geologist. He came to Antarctica on Admiral Byrd’s famous first expedition. He died in 1995 at a ripe 99 years old! Two years later, the LMG was built and named after him. It’s 230 feet long, and specially designed for Antarctic research. It can break through 1 foot of ice, and has laboratories and dive and boating facilities, as well as a galley (dining hall), dorm rooms, and everything else we need to live on board.

This morning, we set sail. We stood out on deck watching the men work to complete loading and remove our moorings, and then away we went! Here’s the view of Punta Arenas as we sailed away. Do you see the yellow and blue building in the middle? That’s the warehouse for the U.S. Antarctic Program and the pier that we left from.

As we were leaving Punta Arenas, a pod of Commerson’s dolphins followed us! 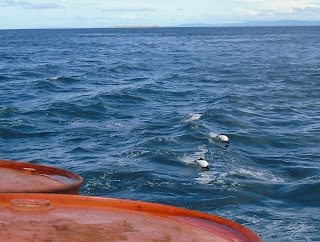 We are currently in the Strait of Magellan, at the southern tip of Chile and Argentina. South America is to the north of us, and Tierra del Fuego is to the south. Tomorrow, we will be out in the Drake Passage, which is the waterway between South America and Antarctica, connecting the Pacific and Atlantic Oceans. It is famous for being very rough waters, with high winds and big waves, and a lot of people get sea sick. The journey will depend a lot on weather, but we could be in for a very rocky ride for the next 3-4 days! We’ll see what tomorrow brings…