Weather and other amazing sites!

I have not been able to post for the past few days. Just after my last post, I took a helicopter from Lake Bonney back to Lake Fryxell, where I was working the previous week. I met Elizabeth there to do help her study the mosses in the streams. Just after we got to camp F6 on Lake Fryxell, bad weather moved in. The wind broke the antenna for the satellite internet! No helicopter could fly in the storm, so nobody could come fix the antenna or pick us up to take us back to McMurdo. So, I didn't have any internet connection for several days. Yesterday, there was finally a break in the storm. A helicopter took Elizabeth and I back to McMurdo yesterday evening.

Although the bad weather made it sort of difficult to work, it did create some very beautiful scenery! 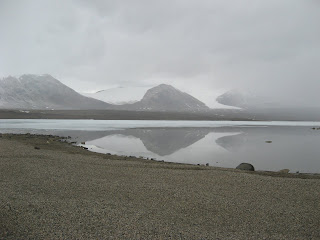 Weather on Antarctica is very interesting. It is the coldest, driest, and windiest of all the continents. During the winter, winds usually come from the South Pole, bringing very cold and snowy weather. During the summer (right now), wind and weather usually come from the north, bringing warmer air. Warm is relative, though. The warm summer winds are around freezing temperature!

The storm we had this past week was from the north. The air it brought was fairly warm, and the temperature stayed above freezing. However, it brought winds around 30-40 mph (which is why our internet broke). There was also a good bit of snow. At McMurdo, there was about a foot of snow on the ground. This isn't a big amount of snow by Vermont or Wyoming standards, but it is a lot of snow for Antarctica, which is a big desert! Out in the Dry Valleys, though, there was only a dusting of snow. 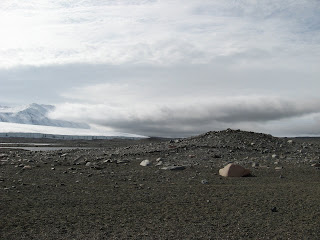 The clouds that come in with a storm are usually low to the ground. This low cloud layer is called a "ceiling". When the ceiling is too low, the helicopters will not fly because the pilots will not be able to see. That is why we were stuck at Lake Fryxell!

The weather in the Dry Valleys can be very patchy. It can be cloudy like this at Lake Fryxell, near the sea, but very sunny at Lake Bonney, further inland. This all depends on how the clouds move in the sky. This picture of Lake Fryxell basin shows you exactly how far the storm clouds came in this week. You can see that it on the left, the mountains are covered with a dusting of snow, and the snow gradually disappears towards the right where the cloud didn't go. 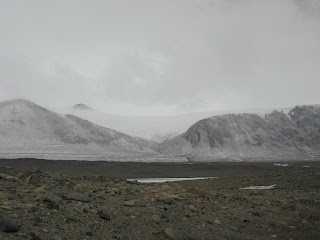 There is also a special type of wind on Antarctica called katabatic winds. These are not weather systems, like you're used to having. They are a type of surface wind. Katabatic winds come from the south, so are made up of very cold air. Cold air usually stays lower to the ground, because it is denser than warm air. Gravity keeps the cold air on the bottom. When the cold air is moving along the ground, it will get pushed higher in the air over mountains and other slopes. When the wind reaches the top of the slope, it may meet warm air traveling from the north. The cold air get pushed back down to the ground by warm air and rushes down the slopes into the valley. This rush of cold air is called a katabatic wind. They can reach 100 mph or more, and are often very destructive! They can blow away tents, buildings, flags, and people! I haven't experienced one of these yet, and I'm very glad!

As the storm clouds slowly leave the area, it becomes safer for the helicopters to fly. The storm is still in the area, but the weather was much better in Taylor Valley! Here is a picture from Lake Fryxell just before we got picked up. The clouds were still there, but the ceiling was not quite so low and we could see the sun and the tops of the mountain peaks again! 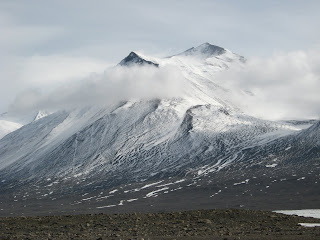 Learn more about Antarctic weather on Antarctic Connection or Wikipedia.

A lot (besides weather) has happened while we were in the field without internet. I will tell you all about it over the next few days!
Posted by Dr. Becky No comments: