Well, our flight was delayed due to bad weather at the field site. Because the plane has to land on a glacier, rather than a proper runway, the weather needs to be perfect. Since we're hanging out around Rothera Station for yet another day, I have more time to tell you about where we're going.

Over the two years of the project, we will be sampling along a "latitudinal gradient". That means that we'll be taking soil samples at sites at regular distances along the length of the entire Antarctic Peninsula. It gets colder as you move farther south in latitude, so we'll be able to look at how the change in temperature influences the microbes and invertebrates living in the soil. This week's trip will take us to the most southern sites along the gradient.

Right now we're at Rothera Station. That's the northern-most yellow star on this map, farthest to the left. (Remember that in Antarctica, every direction away from the South Pole is north, so moving to the left is still moving north, not west!) Tomorrow, we are heading to some sites much farther south of Rothera. Our first stop will be at the middle star to a place called Mars Oasis on Alexander Island. Mars Oasis is an area that is not covered by ice, so we will be able to take samples from an extensive landscape of bare soil. Many species of moss and lichen grow there, which is where we'll be targeting our sampling. 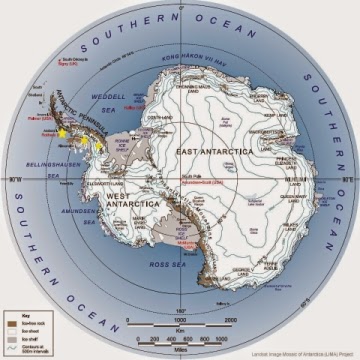 From there, we'll fly to Fossil Bluff, which is just a bit north of Mars Oasis on the same island. (So, pretty much under the same yellow star as Mars Oasis.) Fossil Bluff is a bit of a transfer station for the British Antarctic Survey, and there's a permanent camp there. (You can see a picture of it here.) We'll stop there to switch to the plane that will take us to our southern site. (It would be silly to fly us all the way back to Rothera just to turn around and come back south again.) Of course while we're there, we'll collect soil samples, because we always make the most of our time on the ground, no matter where we are!

From Fossil Bluff, we'll be off to a Sky Blu, marked by the southern yellow star. Sky Blu is on the mainland of the Peninsula and covered by the ice sheet. (You can see a picture of it here.) It's is also mainly a transfer station for getting planes further into the continent, but there are nunataks there that we will sample. (Nunataks are where mountain tops poke out above the ice sheet.) These nunataks at Sky Blu will serve as our southern-most sampling point for the whole project. It's much further south than Rothera, so it will be much colder. I hear from people returning from Sky Blu that it's about -15°C there right now, in the middle of summer!

Hopefully we'll be leaving for this journey tomorrow, but it all depends on the weather at Mars Oasis.
Posted by Dr. Becky No comments: