We made it to Christchurch on schedule! For the past 24 hours, we've been enjoying some summer weather in New Zealand.

Almost two years ago, in February 2011, Christchurch was rocked by a pretty major earthquake. They had a pretty big earthquake in mid/late 2010, just before I was traveling through New Zealand on my way to Antarctica. There were some aftershocks while I was here in January 2011, and then in February 2011 there was another large quake that destroyed a lot of the city center. Since I've been here preparing for my trip to the ice tonight, I've walked around a bit to see the destruction.

For those of you that have read my blog in previous years, you might remember me posting a picture of the statue of Robert Falcon Scott. R.F. Scott was an Antarctic explorer who made several expeditions to Antarctica, the last one of which he reached the South Pole. Unfortunately, his entire team died on the return trip. R.F. Scott was English, but his expeditions left from New Zealand, so his memory is honored here. There is a statue of him that was sculpted by Scott's widow that stood in the city center.

The earthquake knocked it over and broke it into two pieces.
An awful lot of the buildings have also been damaged, particularly the ones in the "downtown" city center area. At the heart of City Center is Cathedral Square, where the Christchurch Cathedral stands.

It survived the first earthquake, but the second major one in February 2011 did a lot of damage. The front end completely fell off! The entirety of Cathedral Square is fenced off. This is as close as I could get.

This is what most of the streets look like in the City Center right now: 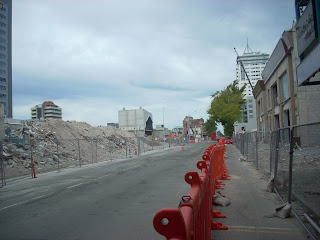 But, the Botanical Gardens, which is my favorite place in Christchurch, is doing just fine. It's as beautiful as always!


During our time, we've been getting ourselves outfitted for the field. I'll post more about that later!
Posted by Dr. Becky No comments: