Merry Christmas from the Ice!

Well, we never made it to the field. The weather didn't clear up enough to be safe for flying until after the holiday break began. That means that the three of us are sitting around McMurdo Station for a couple of extra days. So what did we do? We went back to the helicopter hangar and brought all of our gear back to the lab, so that we could at least spend the time fine-tuning our equipment in the lab, instead of the field.

To move gear between the lab and hangar, I drive the truck. I love driving big trucks, so this part of the job is very fun! All of our gear is in that yellow cart. We put about 500 lbs of it into the bed of the truck and drove it back to the lab. 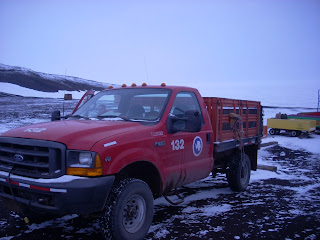 Because we didn't make it to the field, we're celebrating Christmas from McMurdo Station. It's not quite as special as spending Christmas in the field, but everybody tries to make it a good time! Last night, on Christmas Eve, we had a large feast at the Galley (the common dining hall). There was steak, lobster tail, stuffing, potatoes, salad, and lots of desserts to choose from. It was quite good, considering the difficulties of getting fresh food down to Antarctica! Here's Brendan and I sitting down to our goodies: 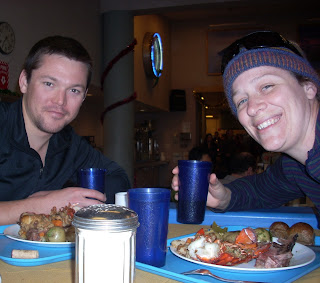 Since we aren't able to do much work from here, we spent some time walking around station to enjoy the outdoors. During the summer, there's 24 hours of daylight in the Antarctic. That means the sun was shining on us on Christmas Eve through the storm clouds. Here's our view looking down on McMurdo Station on Christmas Eve:

We've been rescheduled to fly to the field tomorrow (Wednesday). Let's hope the weather clears up and we can finally make it! We're starting to go stir-crazy!
Posted by Dr. Becky No comments: