Welcome to the first post of 2011! It's been a busy New Year for me here at McMurdo. At the end of last week (and the end of 2010) I was at F6 camp. Bad weather had rolled in which prevented the helicopters from flying into the valley. On Friday the 31st, I had hoped to fly from F6 to Lake Bonney basin for the day, then return to McMurdo Station for the weekend. But, because the helicopters couldn't fly, I didn't make it to Bonney, and I wasn't sure I was going to be able to make it back to McMurdo! Luckily, at the end of the day, the clouds cleared just enough to let a couple helicopters in and move people out of the valley. So I made it back to McMurdo, but just barely!

Here's a photo as I was flying out of the valley. You can see the narrow line of light on the horizon. That's all the space we had to get out! 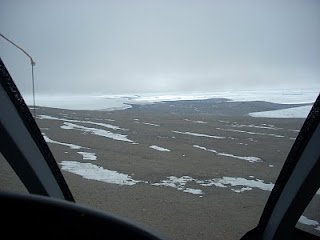 Above us is a thick, low-flying layer of clouds. That's called having a "low ceiling". The helicopters can only safely fly if the ceiling is above a certain height. Finally, around 4:00 PM, the ceiling lifted enough to let us out!

The reason I wanted to return to McMurdo is because I leave the continent on Wednesday morning, and I have a lot of lab work to get done before I go. For the past two days, I've been busy processing samples and preparing them to ship back to the U.S. for more analyses at home. I also have a lot of paperwork that has to be filled out about our activities in the dry valleys since I've been here. And many other chores!

I did take a couple hours to celebrate the new year. At McMurdo, there is a big festival of sorts for New Year's Eve. There's a live concert called "Icestock", where bands that have formed at McMurdo Station perform. Some people dress up in silly outfits, use noise-makers, and other New Year's Eve traditions. Here are the two friends with whom I rang in the new year. Maya and Heidi are Ph.D. students on another project working out of the Dry Valleys. We were all working in the lab until about 11:00 PM on December 31, but came out (wearing our special hats) to make sure we celebrated the arrival of 2011! 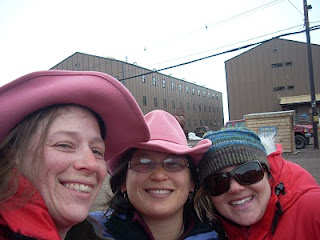 The weather has cleared up a bit, and I'm hoping to make it to Bonney tomorrow to do the work that I had hoped to do on Friday. Fingers crossed!
Posted by Dr. Becky No comments: