I've spent the past couple of days at McMurdo Station setting up our lab and prepping for the field. McMurdo is the largest of the three U.S. research stations in Antarctica. (We also have Palmer Station on the peninsula and one at the South Pole. Also, there are two icebreakers that cruise the Southern Ocean for marine research.) 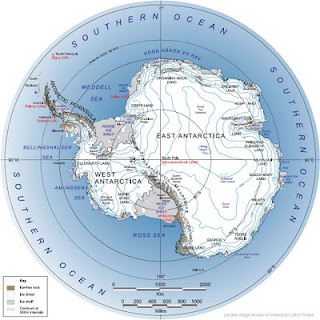 McMurdo Station sits on Ross Island in the Ross Sea, at the bottom-center of the above map. (The area is named after James Ross, the earliest explorer to reach land in this area of Antarctica in the mid 1800's.) If we zoom in on the McMurdo area, you can see that, while I am here at McMurdo Station (the red dot), I'm not actually on the mainland of the Antarctic continent. 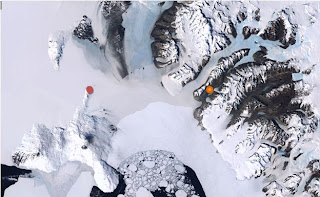 We are, however, on the edge of the permanent ice shelf, an area of the Ross Sea that is frozen on top year-round, so it is frequently considered to be part of the continent. That's why it's shaded a different color in the first map. Below Ross Island (to the north), the Ross Sea is also frequently ice-covered, but it melts back, sometimes as far as McMurdo Station, during the summer months. In the map above, you can see how some of that ice is breaking apart around the island. It is called "sea ice", not the "ice shelf", because it is a different piece of ice than the permanent stuff that makes up the ice shelf.

Also on Ross Island is Mount Erebus: the southern-most active volcano in the world. (The volcano is named after James Ross's ship, The Erebus.) In the second map, Erebus is the black-tipped cone on the right side of the island. Mt. Erebus is always looming in the background here at McMurdo. This is what it looks like from the ground while standing on the ice shelf near McMurdo Station: 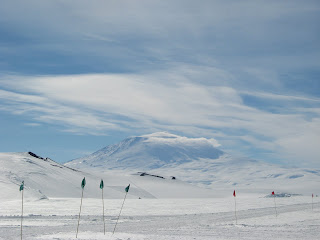 In this photo, Erebus is pretty quiet. Some days we see it puffing smoke quite a bit. 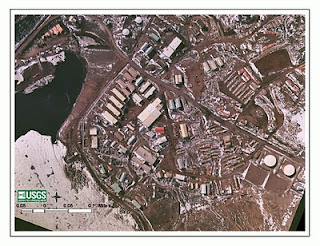 McMurdo and the other U.S. research stations on Antarctica are funded and managed by the National Science Foundation. Research here has been going steady since 1956. Contractors and the U.S. military provide the support to operate the bases and make the scientific research possible. Some of the research is to understand the Antarctic region and ecosystems, as well as the region's response to changes in climate. This includes studying glaciers, geology, soils, and oceans. People study the chemistry, physics, and biology of all of those components. Also, Antarctica is the home to a lot of atmospheric and space research, because the atmosphere is thinner here than other parts of the planet. That means that there are a lot of scientists at McMurdo studying a wide variety of topics, plus enlisted military and contracted support staff (usually adventure-seekers). During the summer season (right now), the total number on base is over 1,000 diverse people. You never know what kind of conversation you'll have when you sit down for dinner!

I have two more days to get myself prepared for my field work. On Monday, I should be heading to the Dry Valleys, which are across the McMurdo Sound on the mainland of the continent. Where I'll be heading is labeled with the orange dot on the second map.
Posted by Dr. Becky No comments: