The bad weather while we were at Fryxell last week brought in another lost guest to the camp: an Adelie penguin! 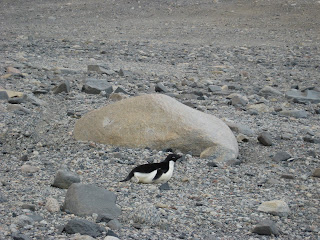 Thousands of Adelie penguins live on the Ross Sea ice shelf and hang out along the edge of the ice where it meets the open ocean. That gives them good access to find food in the sea, without having to be too far from land for safety. Normally, I would never have been able to come this close to a penguin during my visit to Antarctica, because I do not work where penguins normally live. This guy just wandered a little too far inland and was at Lake Fryxell instead of the Ross Sea!

Penguins are aquatic birds. They have wings and feathers, but cannot fly. Their bodies are shaped in a way that is good for swimming, not flying. They have webbed feet and short wings that help them paddle and steer in the water. That means that they are very clumsy on land, though. To see a penguin walk is very funny!

Penguins are very good swimmers and spend a lot of time in the water. They swim so that they can find food to eat. Most penguins eat fish or small shrimp-like animals called krill. However, the water is very dangerous, because there are other animals living in the ocean that will eat penguins! Leopard seals are one type of animal that will eat penguins on Antarctica. Penguins need to live near both land for safety and water for food, so they spend a lot of time on the ice shelf edge by the ocean. You can see groups of them on the ice edge if you fly over the sea in a helicopter. Here is a photo Elizabeth took from a helicopter: 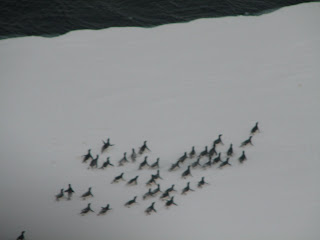 On land or ice, however, penguins are not afraid of being eaten. There are no predators of penguins on land. So, penguins are not usually afraid of people, because they feel safe on land. This particular penguin that we met at Lake Fryxell was not afraid of us at all. Elizabeth and I were walking back to camp, and the Adelie called to us! He did not run away, so we sat and watched him for a while. He sat and watched us, too! Here is a short video of the penguin talking to us while we watched each other:

Penguins live exclusively in the southern hemisphere, mostly around Antarctica. There are no penguins near the North Pole! You will NEVER see a penguin and a polar bear together, no matter what the Coke commercials show. Polar bears live in the North, and penguins in the South.

Penguins live in large groups called colonies. There are many different species of penguins, each of which live and behave slightly differently. The Emporer Penguin's life was made very famous by the movie March of the Penguins. Adelie penguins, like the guy I saw at Fryxell, are slightly different.

Adelie penguins spend most of the year on the sea ice, where it is slightly warmer during the winter. During the Antarctic spring (around October), they return to land to breed. They return to the exact spot where they were born to mate and lay eggs. These places where a penguin colony lives during breeding season are called rookeries. There are several penguin rookeries in this area of Antarctica, where millions of penguins live. Penguin parents make nests of stone, and parents take turns sitting on the eggs to keep them warm. Penguins usually lay two eggs at a time, which hatch within about one month. The chicks grow and learn to swim, and are ready to leave the rookery before winter comes. 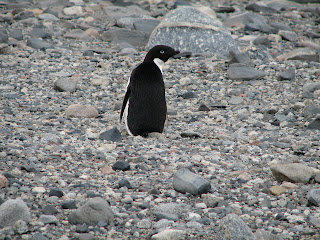 Unfortunately, I won't be able to visit a penguin rookery while I'm here, because you need special permits to be in those areas. Only people that study penguins are able to go there, so that there are not too many humans disturbing the penguins. Sometimes, however, they wander into areas where humans are living, such as McMurdo or the Dry Valleys. That is always a special treat for us!
Posted by Dr. Becky No comments: