During the late 1800's and early 1900's, many countries sent explorers to Antarctica to claim pieces of the continent for their home countries. By 1950, there were 12 countries that were actively exploring or working on Antarctica. They were: Argentina, Australia, Belgium, Chile, France, Japan, New Zealand, Norway, South Africa, the USSR, the United Kingdom, and the United States. Most of these countries had staked claims on portions of Antarctica, many of which overlapped with one another. Many countries already had research stations in various parts of Antarctica, often in other countries' territorial claims.

Since Antarctica is such a unique continent, with such a great potential for learning and research, there was a mutual desire among these countries to maintain Antarctica as a peaceful continent. They wanted to make sure that "in the interests of all mankind that Antarctica shall continue forever to be used exclusively for peaceful purposes and shall not become the scene or object of international discord."

In 1959, these twelve countries met to create the Antarctic Treaty. Under the Antarctic Treaty the countries agreed to cooperate and promote scientific investigation. All territorial claims were suspended. Antarctica has no permanent populations or citizens, only research bases like McMurdo. The countries agreed to have free exchange of information among each country's research groups. No military action is allowed on Antarctica, and weapons may not be kept here. The military may only provide science support on Antarctica. For example, the Air Force flies scientists to McMurdo station, and the Navy helps with shipment of supplies. There are also environmental laws, that preserve the conservation of the animals, plants, and ecosystems of Antarctica. These laws are why we need to be so careful about the water we use, where we leave our footprints, and how we interact with wildlife. Mining and nuclear explosions are banned.

Each country is responsible for making sure its citizens on Antarctica obey the Antarctic Treaty. The U.S. keeps a U.S. Marshall on base to prevent any law-breaking on American bases. However, he is not allowed to carry a weapon.

Since the Antarctic Treaty was signed in 1961, a total of 46 countries have signed it. Many different countries have research stations in different areas of Antarctica. The U.S. has three bases: McMurdo, South Pole, and Palmer (which is on the Peninsula near South America). The map below shows the research bases on Antarctica and which country supports them. The flags from the original 12 countries are still displayed here at McMurdo. 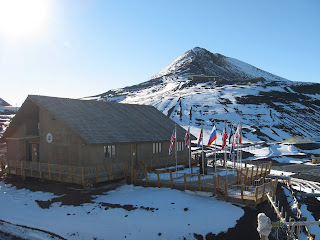