We're done with field work, so we've been using our time to wrap things up in the lab. First, we had to process the samples we collected at Berthelot Island. We had help in the lab this time from Garcon, the traveling alligator. (Since he helped collect the samples, he wanted to see what we did in the lab, too.) 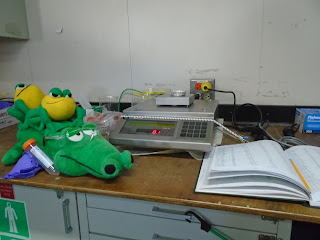 A while ago I told you about some of the lab work that we do. Here, Garcon is helping us weigh out the soils to extract the organisms in the soil. You've already seen the cans we use to get microarthropods like collembola and mites. That method only works well for the tiny invertebrates that live in the air around plant and soil. There are other types of invertebrates that live in the water in soil, such as nematodes and tardigrades. They rely on the water to move around, so if the soil dries out in the funnels under a light bulb, they can't move to fall into our vials of ethanol.  Instead, we have to use water to get them out of the soil. This is usually done using a setup called "Baermann funnels", but just like with everything else in the lab, we have to modify it to work on a ship on the ocean. We wrap some soil in a tissue, then put that tissue on a screen surrounded by water. The invertebrates leave the soil and float in the water outside the soil, then drop down to the bottom of the dish. After three days, we remove the soil and use a pipet to suck up the nematodes, rotifers, and tardigrades to put in vials that we send home to look at under a microscope. We were worried about the dishes of water spilling, because the ship rocks in the waves. Our MT Tom made us this great rack that's fastened to the lab bench, so we were able to run loads of samples all season! 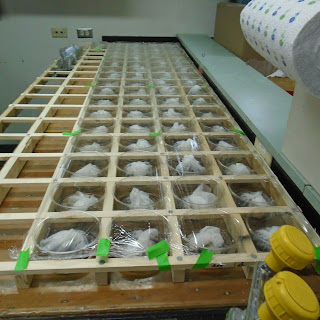 While we're finishing in the lab, the crew are loading cargo and some people from Palmer Station are moving onto the boat to go home. We leave Palmer tomorrow morning to head north.
Posted by Dr. Becky No comments: