We are in Antarctica!

We have finally arrived in McMurdo, Antarctica!

We woke up very early Tuesday morning in Christchurch to take our flight to McMurdo. Our first stop is the U.S. Antarctic Program headquarters to get suited up in all of our cold weather gear. It's summer in New Zealand, so it's very hot to walk around in all of that clothing!
Once we are dressed, it is time to fly! We fly to Antarctica on U.S. Air Force airplanes. So, we don't travel through the normal airport. Instead, we use a special USAP terminal. But, the process is very similar to a regular airport. We check in with our baggage and go through a metal detector. Our bags also go through an x-ray machine. But, instead of having an airline agent check us in, we're checked in by the New Zealand military, and we and all of our luggage are weighed on a big scale. After checking in, we wait in our terminal until it is time to board the plane. Throughout all of this, we're still wearing our cold-weather gear! So, of course, we start taking off layers as we wait. 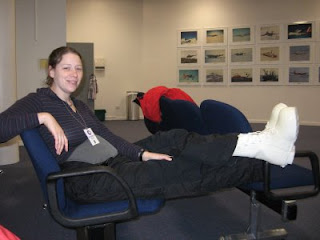 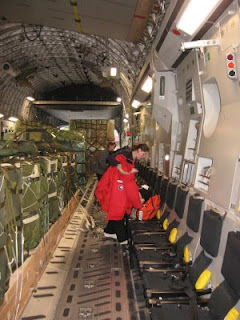 Soon, it was time to board the plane. We flew on a US Air Force C-17. This plane is very big! There were only about 12 passengers traveling to Antarctica, plus the Air Force crew that fly the plane. The rest of the plane was full of cargo bound for Antarctica. The cargo was to be air-dropped over one of the remote field camps where planes are not able to land. That is how the field camp receives its regular supplies of food, fuel, and equipment. We, the scientists, sat on the side of the plane. In front of us were about 100 barrels of fuel strapped to parachutes on egg-carton pallets. After dropping us off at McMurdo, the plane flew to the field site, opened the hatch, and dropped the barrels out. The parachutes will open, and the egg carton pallets will act as shock-absorbers to soften the impact when the barrels hit the ground.

We were very disappointed that we didn't get to see the air-drop! But, it's probably easier for the Air Force crew to perform the air-drop without a bunch of scientists in the way...

After one last five-hour flight, we landed in McMurdo! Here is Katie enjoying her first sight of Antarctica! 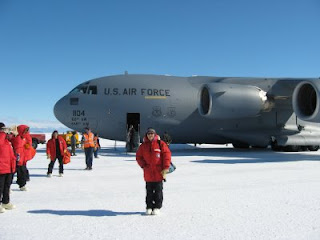 From the runway, we are carried to McMurdo Station in a really big truck called a Delta. 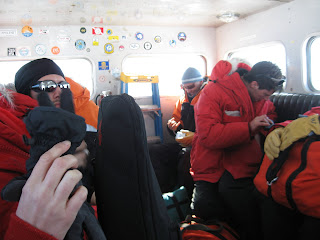 After about 20 minutes driving across the sea ice, we arrive in McMurdo Station- our new home for the next two months! We will spend the next several days getting settled. I will tell you more about that in my next post.
Posted by Dr. Becky No comments: