End of the season close-out

I'm back at McMurdo Station (which we refer to as being back in "Mactown"). I'm preparing myself to head back to the U.S. after a very short field season! 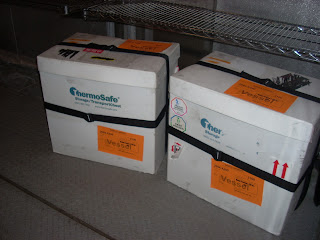 One thing I have to do is prepare all of my soil samples for transport back to Arizona State University. All of the samples that were scooped in the field were sent back to McMurdo Station where they were kept in a freezer. Yesterday, I carefully packaged all of those samples for shipment. They were double-bagged for extra protection and packaged into Thermosafe boxes. The Thermosafes are essentially big, sturdy cardboard boxes lined with styrofoam. Every sample I took is in the two boxes shown on the left. They're sitting in the -10 Celcius walk-in freezer in the lab, ready for their trip home! At temperatures that cold, we are able to prevent the soils from changing, so when I work with them from home, they will be as similar to field conditions as possible. 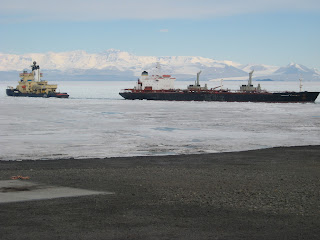 I've also packed up some of my sampling gear to be shipped home, as well. The samples and gear won't be flying home with me. They'll be taking the slow route on the vessel. At the end of every season, there are a few boats that come to McMurdo Station to deliver or carry away supplies. An ice breaker has to come in to clear a path through the ice. Then, the fuel tanker, research vessels full of marine scientists, and supply vessel can dock. The supply vessel brings down food and other supplies for the following year, and leaves with all of our samples and shipments. It will deliver the samples to Port Hueneme, California, which will take a while! I won't see my samples until March or April.

I was supposed to fly back to New Zealand today, but the ice runway is melting again! My flight today was canceled, but hopefully I'll be able to begin the journey home tomorrow. Wish me luck!
Posted by Dr. Becky No comments: