Hello everyone! I'm Jenn, one of the new grad students on the team. On Friday, I headed off to snow school for some overnight training in the field. After a brief introduction at McMurdo, we took the bus to a hut on the sea ice and learned how to use some of the gear in our survival kits. Then we walked over to our campsite on the snow and practiced setting up two large Scott tents and six smaller tents. We even built an open kitchen out of ice blocks, complete with countertops and benches! While some people started boiling water on the stoves for dinner and hot drinks, others started digging trenches in the snow to sleep in overnight. While my trench was pretty much a rectangular hole in the ground, some really enthusiastic campers built a snow palace with staircases and underground tunnels leading to multiple rooms. However, my little trench kept out the wind and snow, and I managed to sleep comfortably bundled up in my sleeping bag.

Dinner in the kitchen: 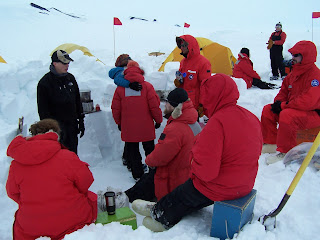 Home away from home: 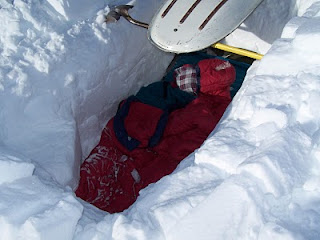 The next morning, we took down the tents and headed back over to the hut to simulate some emergency conditions we might encounter in the field. For example, we pretended that one of our friends was lost in a blizzard on the way to the outhouse, and we had to find a way to locate him. We put buckets over our heads to imitate a white out situation, and about eight or nine of us grabbed part of a rope attached to the hut and began walking in the direction of the outhouse. Little did we know that we began to double back, and we ended up heading straight into the wall of the hut! Our friend over by the outhouse must have thought it was funny to see a bunch of people with buckets on their heads holding a rope and stumbling in circles. Afterwards, we talked about our mistakes and how we could learn from them. Then, the bus took us back to McMurdo, and we were home in time for dinner.

Posted by Jenn No comments: