Well, we finally made it out to the field. The weather at McMurdo has been very patchy. There's been snow and a lot of clouds. But, the weather out in the Dry Valleys has been very nice. So, once they finally had a short window of time to get us out, we left McMurdo and have been staying in the Valleys ever since in some beautiful, sunny weather. Katie and Elizabeth made it out to Lake Fryxell on Wednesday afternoon. Ross and I made it out to Lake Bonney on Thursday afternoon.
At Lake Bonney, Ross and I were working on an experiment that traced the movement of water from melting permafrost flowing over the soil. Permafrost is soil and rock in the ground that stays permanently frozen year-round. It usually is found below the soil surface in cold places like Antarctica and the Arctic. During the summer in the dry valleys, the permafrost will melt a little bit, causing wet patches to appear in the soil. You can see those darker, wet patches of soil in this picture at Bonney: 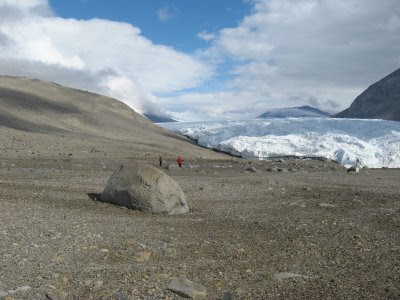 Because it's been so warm this year, the permafrost below the soil has been melting a lot more than usual. At one of our research sites at Bonney, that meltwater has reach the surface (kind of like a spring you might find in the mountains in the US). There's so much meltwater that it ended up forming a stream that flows all the way down to the lake, straight through some long-term sampling plots we set up years ago! (Our team nickname in McMurdo is the Wormherders. Because the stream flows through one of our plots, it is called Wormherder Creek.) Instead of being upset that our plots are ruined, we're using the opportunity to learn about sources of water in the dry valleys and how they influence the soil.

On Thursday, we soil ecologists teamed up with a group of stream ecologists to study how the new Wormherder Creek interacts with the soil to influence soil chemistry and organisms. We added chemicals containing lithium and bromide high up on Wormherder Creek, and we followed how those chemicals moved down the stream and through the soil. There were two people at the top of the creek at the chemical injection site running the pump. Then, there were scientists stationed at regular intervals down the stream collecting samples every 5 or 10 minutes. I was stationed higher up on the creek with Uffe. In this video, you see Uffe labeling the bottle to take the next sample. That bottle gets dipped into the stream flow to be filled with water. You can see another scientist, Anna, further down the stream at the next station. You can also see how fast that meltwater is moving! It's a small creek, but there's a good bit of water in it! The tube next to the orange flag is called a piezometer, which is how we extract ground water from below the surface.
We collected a lot of surface water, ground water, and soil samples for several hours through the night. We will look for the presence and concentration of the chemicals we released high up in the stream so that we can follow how the water moved down to the lake. We will also measure the chemistry of the water and soil, and look at what kinds of organisms we find in various locations, to see how those important properties are influenced by the presence of Wormherder Creek. It was a loooong night, but we finished it!

After we left Lake Bonney late Thursday night, Ross headed to Fryxell to be with Katie and Elizabeth. I have been back at F6 (across the lake from the rest of the group) working on the stoichiometry plots that we treated last week. Hopefully I will be heading back to Lake Bonney tomorrow, but the weather does not look good in McMurdo, so the helicopters may not be able to come get me! Keep your fingers crossed, because I have samples to get back to the lab!
Posted by Dr. Becky 1 comment: