It snowed here Thursday night! It was only a dusting, but that's a lot of snow for this area. The bad weather did not keep us from getting to the field, though (it only delayed us a few hours while the helicopters waited until they could see). So, Friday morning we flew in a helicopter across frozen water to Taylor Valley. Here is a picture of us, in all of our gear, ready to go! There's Mike, Becky, Elizabeth, and Ross, with the helicopter in the background. 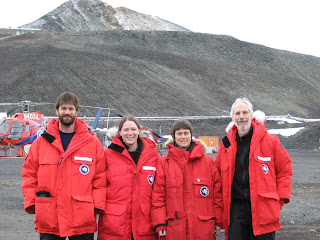 We landed at Lake Fryxell, and set ourselves up at the camp. There are small buildings here for eating and working in, but we sleep in tents outside. We are staying at this camp with four people from NASA. They are working on the Phoenix Project, which is a machine that was sent to Mars to look at Martian soil. They are comparing the dry, cold soil here on Antarctica to the dry, cold soils on Mars. This is one of the NASA scientists, Doug, acting silly after a day of hard work! 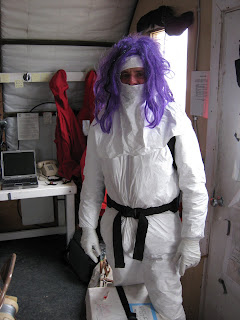 After settling in, we started our field work. We hiked up one of the slopes in the Valley, taking soil samples every 10 meters. This way, we can compare different types of soil with elevation. Long ago, the water in the lake was higher, and there were glaciers covering the whole area. This means that the soil changes as you go higher up a slope. Different soil types will then also change what can live in the soil. We're also interested in what lives in the soil, we also spent some time looking for mosses and measuring how much the animals living in the soil breathe.
We have a neat machine that can measure that for us, by measuring carbon dioxide (the gas that's released when you breathe) in a small area of the soil. 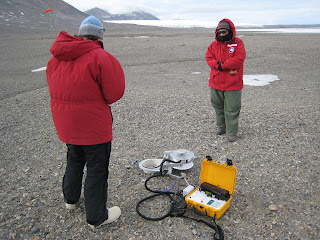 The computer is almost out of battery, so I'll need to write more later!
Posted by Dr. Becky