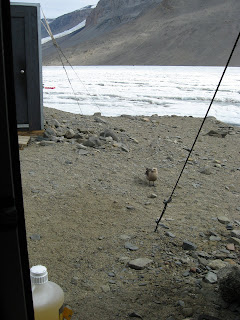 We had a very curious visitor today. A skua has been hanging out around our camp, hoping to find some food.

A skua (pronounced "skoo-uh") is a fairly large sea bird that lives along coasts in polar areas (both Arctic and Antarctic). They look a lot like seagulls, because they are related. They are pretty big. When their wings are outstretched, they are 4 feet wide. That's almost the height of your average second grader! Skuas are mostly brown and very strong fliers. Because they're so big, they don't glide very much, so flap their wings a lot. They can swim, and have webbed feet like a duck. 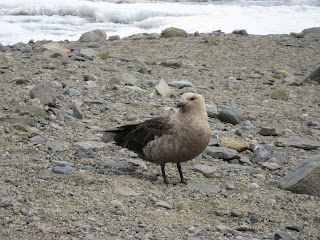 Skuas are migratory, meaning they fly to a new place to breed and have chicks. Antarctic skuas fly here to breed in the late spring, around October. They nest on the ground or among rocks along the shore. They usually lay two eggs at a time, which hatch in December or January.

Skuas are hunters that eat meat, especially fish. To help them hunt, they have a very sharp, hooked beak and claws on their feet. But, they will also eat just about anything they can find or steal! They will eat eggs and dead animals, such as seals and other birds. They also steal food from other birds. Around the camps on Antarctica, skuas will steal food from the scientists if we're not careful!

When an animal eats whatever it can find, it is called a scavenger. Skuas are scavengers, which is why this guy has been hanging around our camp. He's hoping we drop some food that he can steal! So, we have to be very careful not to leave anything edible behind. It is illegal for us to interfere with any of the wildlife, including skuas. We are not allowed to feed the skua, shoo him away, or do anything to make it change its behavior. The skuas are not afraid of us, because we won't do anything to them, which means that they harass us instead! They fly around our heads while we're doing field work, and will even fly right at people! [Photo credit: Wikipedia]
The skua that visited us today also visited Ross and Elizabeth at the other end of the valley at Lake Fryxell. He reportedly investigated the contents of their backpacks. Ross said the skua attacked Elizabeth, but this picture doesn't look very threatening: 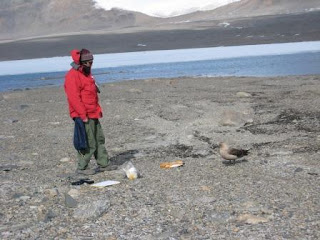 Because skuas will scavenge whatever they can find, it is used as a slang term around McMurdo and Antarctica. Our lost-and-found is called the "skua bin" because people will dig through it to find clothes or other useful things for themselves. If you eat someone else's leftovers at dinner, you might be called a "skua."

Unfortunately, this particular skua visiting us did not get anything to eat! He's been around for about two days, but will hopefully fly back to the ocean soon. That's the only place he's going to find something to eat!

Learn more about skuas on Wikipedia or Antarctic Connection.
Posted by Dr. Becky