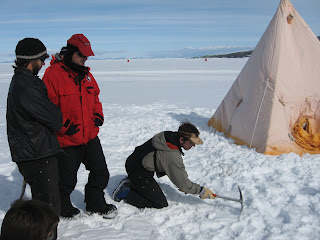 This is the first time I've been to McMurdo Station, so I've had to attend many different trainings since I've arrived. I've learned about taking care of the environment, working around helicopters, and using the laboratory here at McMurdo. But best of all I went to Snow School. I got to spend two days out on the ice learning about cold weather survival. On the first day, a HUGE Delta vehicle took our instructor, 7 other students, and me from McMurdo to Snow Mound City. Once we got there, we had to set up camp since we would be spending the night. Our instructor showed us how to set up different kinds of winter tents and build a snow wall to protect the camp from wind. The picture above shows our instructor demonstrating how to properly stake the tents so they don't blow away in the wind. 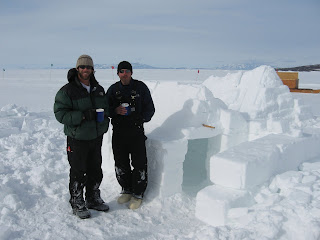 Several people in the class tried to build different kinds of shelters with blocks of snow. Two students built a very cool two room house. We all spent the night in either tents or the shelters we built. The next day we practiced communicating with different radios used in Antarctica. We used VHF and HF radios. We tried to talk to the South Pole with an HF, but no one answered us. We also learned what it is like to get lost in a snow storm. We all wore buckets on our heads and tried to look for each other. During huge storms the wind blows snow around so much that you can't see a thing, so wearing a bucket on your head is very similar to what it's really like to be lost in a storm. In the afternoon a Delta came and took us back to McMurdo Station. It's amazing how much I learned in just two days! Safety is very important when you live and work in a cold environment. Snow School is designed to give everyone the tools to make smart decisions, prevent problems, and safely do their work and enjoy this wonderful continent. Now I can say I've spent the night out on the ice in Antarctica.
Posted by Katie M