When people think of animals that live in Antarctica, they almost always think of penguins, seals, and whales. And, while those animals do live down here, they don't live on most of the continent. They only live in or near the water, and not on the actual continent (except for penguin rookeries, like I've shown you). But, there are animals that do live on the actual continent! You just can't see them, because they're microscopic. Most of our studies focus on how these animals respond to changes in environmental conditions and influence biogeochemical cycling. So, it's important for me to tell you more about them! Here's some information about the main types of micro-organisms that live in Antarctic soils. 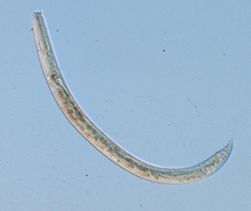 Also called roundworms, nematodes live EVERYWHERE in the world. You can find them in every biome in the world. They live in water, soil, ice, even in other animals! They are the most abundant animal in the world. In the dry valleys, we find more nematodes than any other animal. They are what our collaborators at Colorado State focus on studying. We have three main species that live here. The most numerous species, Scottnema lindsayae, is in the photo to the left.

Nematodes eat a lot of different things. Some, like the guy at the left, eat bacteria. Others eat fungi or algae, and some are even predators that eat other microscopic soil organisms. In the dry valleys, a predatory nematode is the top of the food chain!

Rotifers
Rotifers also live in a lot of different environments, including fresh water, saltwater, soils, and other watery environments. A rotifer eats by waving the hairs around its mouth (at the top, in this picture) to catch things floating in the water. The moving action around their mouth looks kind of like a wheel, which is how they got the name ROTifer (like rotate). The "foot" (at the bottom of the picture) is to anchor the rotifer when it doesn't want to move.

Tardigrades are also called water bears, and looking at the picture I think you can see why! They even have claws at the end of their feet, which you can see in this very close-up microscrope picture that Uffe took of a tardigrade foot. The claws let them hold on to something as they float through water or the water-filled spaces in the soil. Tardigrades eat with a stylet that they use to pierce animal and plant cell walls. 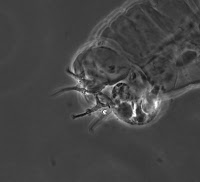 Tardigrades are able to live in a lot of extreme environments, and are found everwhere from the Himalayas to the ocean floor to Antarctica. They can withstand the pressure of a vaccuum, radiation, dehydration, and both incredibly high and low temperatures. There are even experiments that test tardigrades' ability to live in open space! In the dry valleys, they especially like to live in the moss and algae patches, where food and water are readily available.

The soil environment in the dry valleys is a very hard place to be an animal. There's not a lot of water, not a lot to eat, and it is very cold! Most of these micro-organisms have a special ability to help survive in such a harsh environment. They can go into anhydrobiosis, which essentially means they can freeze-dry themselves. They can push out all of their water and curl up, so that they don't freeze and die. Their metabolism drops to almost a stand-still! They can stay in anhydrobiosis for a very long time, and immediately wake up if water becomes available.