Today I flew back to the camp at F6 on Lake Fryxell in Taylor Valley.

Because there were two stops we needed to make before dropping me at F6, I got to fly over some pretty cool scenery. Instead of coming in the mouth of Taylor Valley from the (frozen-over) sea ice, I flew from over the Asgard Range of mountains that border Taylor Valley on the north side. There are alpine glaciers that cover a lot of the area up there. 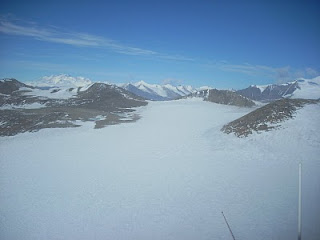 This is the view I had coming over the Asgard Range, most of which is covered by the glacier. Just beyond the mountain peaks in the foreground is Taylor Valley. (In the background of the photo are the Kukri Hills, which make up the southern border of Taylor Valley.)

There is a lot of land under the glacier, we just can't see it. However, some of the mountain peaks are tall enough to poke out of the glacier. These are called "nunataks". You can see an example of a nunatak on the right-hand side of the picture above. Nunataks are isolated from the rest of the land by the surrounding ice, which is how they get their name. "Nunatak" is an Inuit word that means "lonely peak". They are not created by the glacier, but were a part of the mountain range before the glacier was there. While organisms living on land below the glacier will probably be killed by the glacier, they may be able to survive for a long time on the nunatak. Scientists find all sorts of organisms living on nunataks in Antarctica, such as bacteria, lichens, and mites. So, even though nunataks are isolated, they are not uninhabited.
Posted by Dr. Becky