We were scheduled to fly this morning to New Harbor, but we woke up to falling snow. This is what it looks like at McMurdo Station right now:


The bad weather has made visibility very poor. That means we're stuck in McMurdo, because the helicopters can't fly when visibility is poor. If we can't see across the sound to the Dry Valleys on the mainland, we're not able to fly there. This is the view from our lab window right now. Normally you can see straight across McMurdo Sound to view the mountains on the mainland (which is where we're trying to go). You can't even see them today! 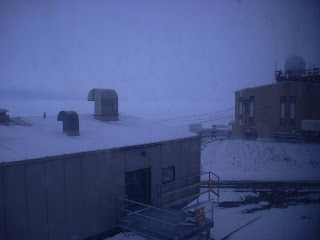 We're technically only delayed right now, so there's a chance we'll get out later, but it's not looking good! If we don't get out today, we'll be stuck in McMurdo until Wednesday, because of the Christmas holiday. That would be bad, because we have work to do out in the Dry Valleys!
Posted by Dr. Becky