Back at Palmer Station

We traveled to Cape Evensen, which is an extra site that we added to our trip. Because we were so far ahead of schedule, we got permission to go even farther south to sample in a small gap in our overall gradient. Cape Evensen is at 66°S, so just below the Antarctic Circle.

The weather was nice enough while we were there. Since it had snowed the day before, though, we found that it was difficult to find any sampling sites. We saw moss in several locations, but not in large enough patches to sample. We won't sample beneath a plant if it means the whole patch would be taken, because that is too destructive. Plus, a lot of them were on the sides of sheer cliffs, and we could not get to them! The one place where we had record of previous scientists sampling was completely covered by snow, so we couldn't get to it. So, it was disappointing not to be able to sample, but we did get to see a lot of great scenery while we traveled the coastline trying to find something. Plus, Cape Evensen is on the mainland of the Antarctic continent, whereas our other sampling sites have all been islands just off the coast of Antarctica. Connor and Kelli got to set foot on the continent for the first time! 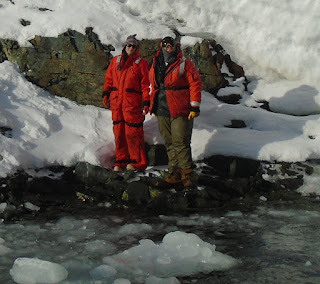 We then traveled back north to the Berthelot Islands in the hopes that some of the snow had melted. We were in luck! The day was sunny and just above freezing. The snow was melting pretty quickly. We spent the day scoping out potential sampling sites, and found one that would work. We decided to wait to sample until the next day, to give it the best chance to melt. That night, we had the most beautiful sunset, with a crescent moon, and that night the sky was so clear that we could see every star. The Chief Mate even turned out a bunch of the flood lights for a while so that we could see better.

The following day we sampled on Berthelot Island as we planned, except clouds had come back into the sky and everything was pretty frozen! It was a very icy and slippery sampling, but we did it! We even had help from Garcon, the traveling Alligator from Lafourche Public Library in Galliano, Louisiana! 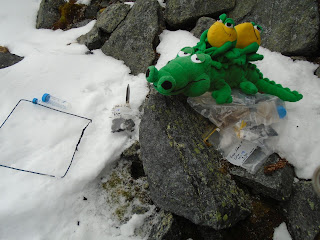 After sampling at Berthelot, we headed back up to Palmer Station where we will be picking up some cargo, as well as a few people who are returning to the U.S. along with us. That's where we currently sit!
Posted by Dr. Becky