A Day in Helsinki

All of the students made it into Helsinki yesterday, and after a shower, a good night's sleep, and some coffee, we were ready for a day of learning in Helsinki!

Our day started at the University of Helsinki's Viiki Campus, which is where their environmental and sustainability programs are located. Here we are at the entrance to the Biocenter (or Biokeskus, in Finnish) for Helsingin Yliopisto (Finnish for Helsinki University), bright eyed and bushy tailed despite our jetlag!
We started the morning hearing from the Senior Economic Officer with the U.S. Embassy in Helsinki about Arctic issues. Finland is now the chairing country of the Arctic Council, which is made up of all eight nations that fall within the Arctic and indigenous groups native to the Arctic to promote cooperation in important issues like environment, climate, economics, and people. We were particularly interested to hear about the work of the Council and their goal of promoting decisions based on science, and to think about how science can better be communicated to politicians and the public. (And it was cool to hear about careers with the Embassy!) We were so interested, that we continued talking about what we heard after Jay, our visiting officer, had to leave!

Then, we got to tour the Biocenter facilities and learn about some of the cool science being done by ecologists at the University. We learned about everything from viruses (and some very creative origami viruses!), to microfossil moss leaves used to understand past climate change from before humans were around, to how growing plants respond to changes in their climate. I think the favorite part for everyone was the greenhouses and experimental fields outside, because we love our sunshine and foliage! (We lucked out and had some beautiful weather today.) 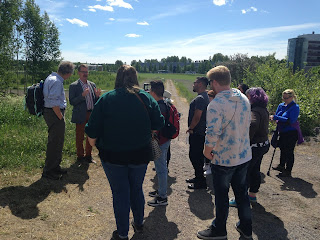 And that was all before lunch! After lunch we took the city bus to the Finnish Museum of Natural History (or, Luonnontieteellinen Keskusmuseo). Students were assigned to tour the museum, and identify their favorite exhibits that do a good job using artistic elements to communicate complex scientific concepts. I think my favorite was a hallway where it showed animals and plants that live in mountains, going from high elevation at the beginning of the hallway down to low elevation as you walk though. The left side showed that gradient in the Rocky Mountains in the U.S., and on the right it showed the gradient in the Alps in Europe. I thought it was cool, because it showed you that, no matter where you are, things change in a similar way as you go from high to low on a mountain. While the species might be different between Europe and the U.S., they are often related, and they have a similar niche. (Unfortunately, it's hard to take a photo of both sides of a hallway... so I can't show you.)

We ended the evening with a group dinner, and a quick visit to a sound space art exhibit. (That's an art installation where you enter a room and listen to the sounds being projected, with carefully chosen frequencies and rhythms.) Here we are at dinner, still awake despite the jetlag! 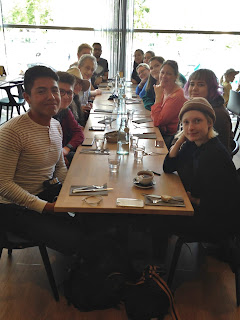 Now we are back at our hotel. Tomorrow morning we get up early and head back to the airport, because we fly north to Kilpis! We are excited to get north of the Arctic Circle and begin our research projects!